This is a really cool "Friendly Encounters" edition.  First, as my friend Jacques would say, he is featured in it.  Jacques is cool (it's always good to butter up the boss).  Seriously, Jacques is a good dude and has been one of the highlights of my years working with Resistance Pro.  He is one of the very first people I met within the company.
He also happens to have an extensive collection of memorabilia.  One of his most unique pieces can never be sold however.
He has a tattoo of David Naughton on his right forearm.  Serious, look at the picture.  There is the star from "American Werewolf in London" etched into his forearm.  That is passion for the film!
I'm not the only one impressed with that either.  David Naughton himself enjoyed seeing the tattoo at a recent Days of the Dead convention.  I can't say it was the only such tattoo he has ever seen, but you can bet there haven't been many (if any).  Leave it to Jacques.
As a sidenote, I had no luck talking Jacques into adding a Johngy tattoo to his other arm. 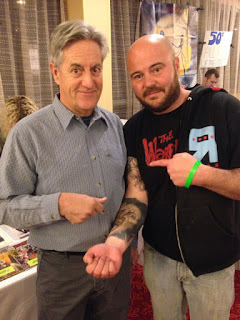 David Naughton and Jacques Baron in Schaumburg, IL-November 2015.
Posted by Johngy at 6:00 AM