There is a lot of stuff that goes into this Friendly Encounter.  First is the setting.  It occurred at Days of the Dead in Atlanta.  I have written many times about the Days cons.  They are always an awesome time.
Why was legend Ric Flair at a horror con?  The answer is simple.  Demand.  Ric Flair draws fans.  The promoters of Days are open to other guests outside of the horror genre.  When you see Flair's line of 500 or so fans, it makes perfect sense.  Kudos to Days for thinking outside of the box.
The second element is Fifi.  She holds a place in wrestling history for her short stint on WCW television as the maid ion the "Flair For the Gold" segments.  Seeing her with Flair years later is a trip.
Lastly and certainly not least, is "Hardcore" Heather Owens.  Heather is part of the crew that makes the Days cons run.  She also happens to be one of my favorite wrestlers at Resistance Pro.  Heather is pure entertainment in the ring and as sweet as can be outside of the ring (do not tell her I said that).
I am sure this was a "mark out" moment for Heather and Ed.  I think it should have been equally so for Flair.  He had to be pumped for meeting this "classy broad." 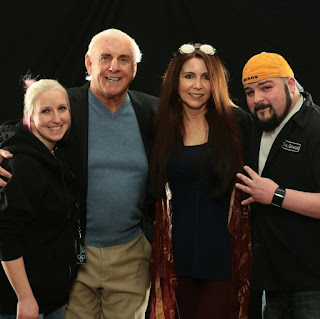 Heather Owens, Ric Flair, Fifi and Ed Gonzales in Atlanta, GA-February 2016.
Posted by Johngy at 6:00 AM