Valerie Bertinelli was born in Wilmington, DE and became famous on One Day at a Time, which was set in Indianapolis, IN.  Thirty plus years later, she was just as cute starring in Hot in Cleveland.  It's that Cleveland connection which brings us to her Celebrity Jersey Card.  She's got an interesting grip on the ball there.  She gets extra points for the cap.  Actually, she gets extra points for everything. 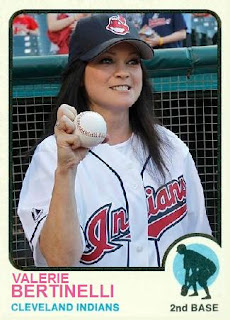 Actress Monica Potter was born in Cleveland, OH and stayed true to her roots for her Celebrity Jersey Card.  She started acting on the daytime drama The Young and Restless, then moved to the big screen  She since has returned to television, most notably in Parenthood.  Potter gets extra points for the cap and for the pitching pose.  I'll also give her a few more points for being so cute. 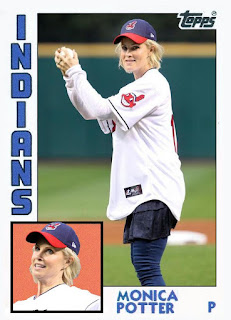 Looks like Valerie is experimenting with a knuckleball. That's one way to stay in the game at 56. Can you believe she's 56? I'm a year older and I can't believe that. BTW she looks much better than I do.

She looks much better than I do and I'm five years younger. I have seen her in person, up close, and she looks amazing!