Scottie "The Wonder Boy" Steiner is the official timekeeper at Resistance Pro.  As such, he has met quite a few wrestlers over the years.  He doesn't really get too excited about meeting even the bigger name wrestlers.  Scottie is one cool customer.
He did get a bit jacked though when we met WWE Hall of Famer Hacksaw Jim Duggan at C2E2.  We both got our pictures with Hacksaw, but when he was done with mine, he instructed us to take another, as he choked me.  This is classic Hacksaw.  He gives more than expected every time.  After seeing Hacksaw do this to me, Scottie asked him for the same treatment.  Of course Hacksaw complied.
Scottie was a big help to Johngy's Beat at C2E2 and I am glad he got to have some fun in pictures like the one with Hacksaw.  Someday, Scottie should be a lock for the RPro Hall of Fame. 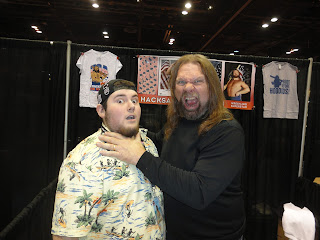