American IFBB professional physique competitor Sadik Hadzovic won the first ever inaugural Arnold Sports Festival Pro Men’s Physique contest.  His family came to the United States, escaping Bosnia and Herzegovina.  He has had a very successful contest career.  This all makes for a very interesting story.
Another interesting story belongs to Dominique "DC" Collins, a two time Legends Football League champion with the Chicago Bliss.  As I have previously written many times, DC is one of the most underrated and toughest players in the LFL (and probably all of sports).
At the Arnold Sports Festival, DC found herself walking next to Hadzovic.  Of course, she took the opportunity to take a selfie.  It is only fitting, because if you know anything about DC, you'll know how hard she works and what progress she has made over the years.
Dominique has always been a dedicated and successful athlete.  It is even more credit to her that she continues to work on her skills and her physique, instead of resting on her accomplishments.  I follow her progress on social media and I see it at practices.  Nobody works harder than DC.
I can't help but think somewhere there is a blogger friend of Hadzovic who will write a similar piece about him meeting DC.  Afterall, how often do you run into a two time LFL champ like DC? 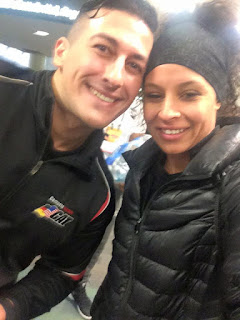