Originally from New York, Judd Apatow started his show business career as a stand-up comedian. He has since become a producer, director, writer and more. Some of his projects include The 40 Year Old Virgin and Knocked Up. Most recently, he acted in The Disaster Artist in 2017. He gets extra points for his Celebrity Jersey Card featuring Hall of Famer Mike Piazza. Apatow is wearing #16, worn most famously by Doc Gooden and Lee Mazzilli. 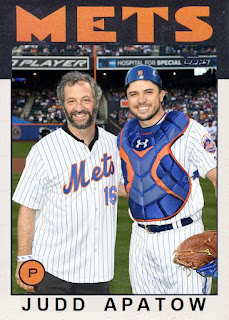 Born in Columbia, John Leguizamo also started as a stand-up comic, before moving into directing, producing, acting and writing. While Leguizamo has had roles in many notable films, he also starred as Captain Vegetable, who encourages Elmo to eat his vegetables. Leguizamo's Celebrity Jersey Card comes from his ceremonial pitch. He wore #18, most notably worn by Darryl Strawberry. 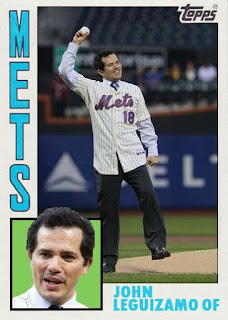