Today, I am once again featuring a Chicago Bandits theme. Today, I have one of my favorite fans and one of my favorite former players.
Mark Pandocchi is one of the founding fathers of Bandit Nation. You can usually catch him in his seat behind home plate. He chats with fans and players in the on deck circle, too. Mark has even joined the Johngy's Beat crew and helped with some video work. He is also one of the organizers and hardest workers who put on the Tail Gate parties.
Tatum Edwards came to the Bandits with her twin Taylor from the Pennsylvania Rebellion. Previously, both starred at the University of Nebraska. Tatum was a fan favorite and often delighted us with her walking handstands before games.
Unfortunately, in the big turnover offseason prior to the 2017 season, Taylor was traded to the Scrapyard Dawgs and Tatum retired. Tatum had already started her coaching career. She recently left her position as pitching coach at Purdue to return as a coach with Nebraska.
Tatum and Mark are another two examples of the quality of people on the field and in the stands for the Bandits. It's a special environment and I am happy to be part of it.
Check ChicagoBandits.com for info on the team. Also, check here for recurring coverage of the Bandits! 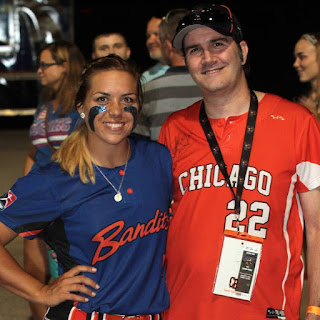