Friend Encounters is a weekly series featuring friends who have met celebrities. Today, I present a special Friendly Encounter Swag Week edition.
Gwen Svekis was a star catcher at the University of Oregon. She led the Ducks to three Women's College World Series appearances in 2015, '17, and '18. The Chicago Bandits selected Gwen third overall in the 2018 National Pro Fastpitch draft. "OreGwen" quickly became a fan favorite of Bandit Nation. "OreGwen"
I had the honor of interviewing Gwen during her rookie season. That interview can be found at On the Beat With Gwen Svekis.
Partly because she was a catcher like he was, my buddy Jim Strong became one of her biggest fans. A relative newcomer to Bandit Nation, Jim has earned his place as a huge fan and supporter.
When the Bandits held Silver Linings Night and wore pink jerseys to raise money and awareness for breast cancer, they had a jersey auction. Jim was an active bidder, eventually landing the jersey of his favorite catcher. Of course, after receiving it, he had to get a picture with Gwen and her (now his) jersey. As the owner of several Bandits jerseys, I know how cool that is to have a bit if Bandits history.
I frame mine, but Jim has been known to wear his. You can see him at many games wearing his Bandits jerseys. (He also bought several replica jerseys/)  I already look forward to many fun games with Jim next season.
Go to ChicagoBandits.com for more info. Also go to ProFastpitch.com for new on the whole league. 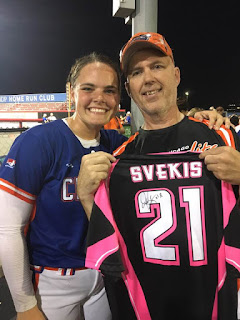