Celebrity Jersey Cards is a regular series in which I create virtual; trading cards for celebrities wearing jerseys. While we wait a week for the Super Bowl, we take a break from football.

Born in Utah and raised in Indiana, Amy Freeze has a great name for a Meteorologist. After a successful run as the first female Chief Meteorologist in Chicago, Freeze has been with ABC in New York since 2011. During her time in Chicago, she dropped the ceremonial puck for the Chicago Wolves to earn her Celebrity Jersey Card. 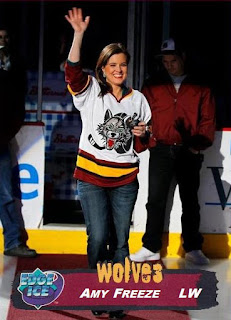 Daniel Bernard Sweeney was born in New York and rose to fame in Hollywood, acting as D.B. Sweeney. Since the mid-1980s. Sweeney has kept busy on television and motion pictures. Somewhere during that time, he dropped a ceremonial puck for the Chicago Wolves and landed on a Celebrity Jersey Card. Patrick Cannone of the Wolves and Jake Chelios of the Charlotte Checkers are the players. 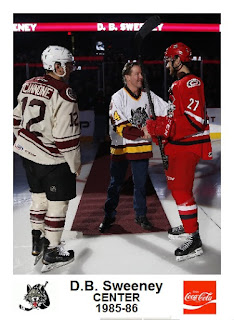