The Motor City Comic Con was supposed to be in May, but it has been postponed due to the pandemic. While I sadly wait for the situation to be resolved and the MCCC to be rescheduled, I am recalling some of my favorite times there.
Steve "Sting" Borden has been a wrestling star for more than 30 years. Sting progressed from a popular surfer character to a dark Crow character to a crazy Joker gimmick, all the while delivering great matches and growing in popularity. Sting eventually joined the WWE and was inducted into the WWE Hall of Fame. Unfortunately, an injury prematurely ended Sting's in ring appearances. Rumors still persist though of a return, but only time will tell.
I had the pleasure of meeting the icon at Motor City Comic Con s a few years back. Appearing in his Crow paint, Sting was hugely popular as the long line of fans would prove. He was as nice as could be given the tight time constraints.
This was a rare chance to meet Sting, as he doesn't do a lot of appearances. Even though his line was long (probably the longest of anyone at MCCC that year), it was much shorter than it would be at a wrestling convention. The MCCC usually has a few wrestlers at their shows and it is a great way to meet them without the huge lines you would have at a wrestling con.
Go to MotorCityComicCon.com for more info and follow MCCC on Facebook for more frequent updates. Look for recurring coverage on Johngy's Beat. 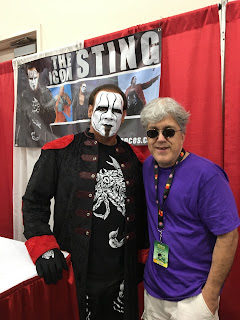