Grant Hill is a second-generation pro athlete, following his father Henry into the NBA. Grant's uncle Jim was a Major League Baseball pitcher, too. Grant played for four teams over his 18 seasons in the NBA, including the Phoenix Suns. For his Celebrity Jersey Card, Grant crossed sports, wearing an Arizona Diamondbacks jersey. He currently is part-owner of the NBA Atlanta Hawks.

California born Diana Taurasi starred on the basketball court at the University of Connecticut. Taurasi was selected first overall in the 2004 WNBA Draft by the Phoenix Mercury. She has played for the Mercury her entire WNBA career, winning three titles, one MVP award, nine All-Star games and many other awards and honors. Nicknamed "White Mamba" because of her ability to score in crucial situations, Taurasi crossed sports for her Celebrity Jersey Card, naturally wearing a jersey of the Diamondbacks. 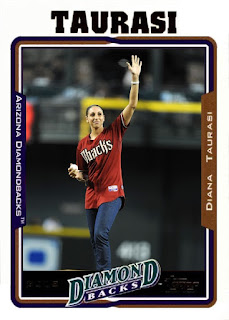