After much anticipation, the Squared Circle Expo debuts in Indianapolis this Friday and Saturday. It promises to be two days of fantastic wrestling fun.
Two of the main folks behind the Squared Circle Expo are Adolfo and Carrie Dorta. I met Adolfo many years ago when he was one of the organizers of a different convention. He met Carrie at one of those events and they got married a couple years ago. It was  a true convention love story involving two awesome folks.
Along with some other great people, Adolfo and Carrie have organized the Squared Circle Expo. Banking on years of convention experience, excellent people skills, pure energy and a passion for wrestling, the promoters of SCE have gone all out to make it a success.
Adolfo, Carrie and the crew have brought so many great wrestling legends to other conventions. Roddy Piper was a frequent guest, while many others enjoyed the convention so much they appeared multiple times, too. The quality of wrestlers was a testament to how well they were treated by Adolfo and the staff there.
Of all the wrestling guests, it didn't get any bigger than 2015 when "The Nature Boy" Ric Flair was the headline guest. Fair's line was one of the longest I have seen, but he made every fan feel special in their interactions. Normally a blur of activity, Adolfo and Carrie did make sure to stop for a moment to get a picture with the Hall of Famer. Adolfo even flashed the famous "Four Horsemen" sign.
The announced wrestling guest list for Squared Circle Expo includes, Glen "Kane" Jacobs, Rey Mysterio, Christian, Vickie Guerrero and many more. I am quite certain there will be many wrestlers in the crowd as attendees as well. I am sure the crowd will also include many other folks involved in wrestling on some level. I can't wait, but fortunately it is only a few more days away.
Check out SquaredCircleX.com and follow them at Squared Circle Expo on Facebook for all of the info and updates. I hope to see you all there this weekend. 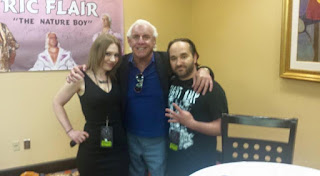 Carrie, Ric Flair and Adolfo in Indianapolis, IN-June 2015.
Posted by Johngy at 6:00 AM