I have never met Amanda Ruller, but we have been long distance friends for several years. She is high on my list of people I want to meet though.
I first became aware of Amanda because of her Legends Football League career. She played for the Los Angeles Temptation and the Atlanta Steam. She was even kind enough to do a promo for me, despite never meeting me. That promo is at Amanda Ruller Loves Johngy's Beat.
Prior to playing in the LFL, native Canadian Amanda was an outstanding athlete at the University of Regina. Not just an athlete, Amanda achieving a Bachelors of Kinesiology degree. Currently, among other activities, Amanda is the Game Day host, a reporter, a coach and one of the most positive people I have ever known.
Late in 2019, Amanda met Don Narcisse, a Canadian Football League Hall of Fame wide receiver. He played 13 seasons for the Saskatchewan Roughriders, catching 919 passes for 12,366 yards and 75 touchdowns in 216 games. He holds or held many records.
Amanda was excited to meet Narcisse and I am sure he was just as excited to meet her. You don't meet many Hall of Famers, but you also don't meet many people like Amanda. She is a Hall of Famer in life.
Amanda is so much fun to follow on social media. You will see feats of strength, exercise routines and tips, fun bits from her daily professional and personal life and more. It always includes a smiling Amanda. She seemingly never frowns. Amanda's social media pages are a regular stop in my circuit. She never fails to brighten my mood.

You can follow Amanda at @AmandaRuller on Instagram. You'll see her professional stuff, as well as all sorts of other fun. 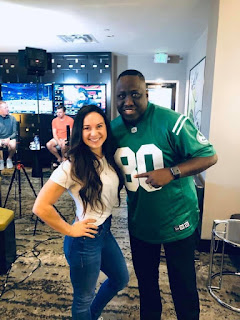 Amanda Ruller and Don Narcisse in Houston, TX-December 2019.
Posted by Johngy at 6:00 AM