Is today's feature really a Friend Encounter? Is a picture of two teammates really a celebrity encounter? It's my site and my rules, and I say it qualifies. Besides, it gives me another reason to write about two of my favorites from my years covering the Chicago Bliss of the Legends Football League.

Heather "Rockstar" Furr and Alli "Bert" Alberts were two key parts of the Bliss dynasty. Together they won multiple titles, collected many awards, received a lot of accolades and had a big fan base.

Heather was the quarterback and a natural leader. She wasn't the best pure QB in the league, nor did she possess the best QB skills, but she was a winner and as tough as could be. She was the female version of a healthy Jim McMahon. Heather knew how to play, knew how to market herself and the team and was just fun to watch. I would take Heather on my team every time!

Alli was Heather's favorite target. A star wide receiver, Alli also shined on defense. She had great hands and looked so smooth on the field. She could also mix it up with the toughest of them.

They were great solo and even better together. Best of all, they were incredibly nice people, who always had time for an interview or chat.

Several years removed from their playing days, Alli is well into her dentistry career and Heather is carving her niche in real estate. Both are married with one young one.

I have a lot of great memories of covering the Bliss. Actually, Heater and Alli were two of the first four Bliss players I ever interviewed at a sports convention in Rosemont in 2013. At the time, I didn't have a clue at how much fun was ahead.

I will always have great memories of Alli and Heather. I appreciate all they did on and off the field. I thank them for their time, consideration and friendship always. 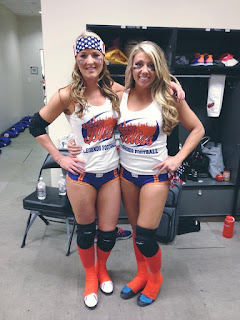 Alli Alberts and Heather Furr in Chicago, IL-November 2017.
Posted by Johngy at 6:00 AM