Minnesota born Rachael Ellering followed her father Paul into wrestling. Paul was the manager of the legendary Road Warriors. I had the pleasure of meeting Rachael when she wrestled for Resistance Pro, where she won a tournament to become the RPro Women's champ. Rachael went on to win Tag Team gold with Jordynne Grace in Impact Wrestling, where she currently is. For her Celebrity Jersey Card, Rachael is wearing a #69 Minnesota Vikings Jersey, most notably worn by Doug Sutherland and Jared Allen. WWE star Brock Lesnar also wore #69 in his tryout with the Vikings. 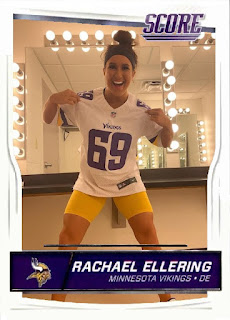 Born in Boston, MA, Eve Torres became an actress, model, dancer and more, including a stint as a wrestler, where she was the first ever three-time WWE Divas champ. She retired from wrestling in 2013, but remains active in the entertainment world. For her Celebrity Jersey Card, Torres gets extra points for having a football, but loses a point for not showing her number. 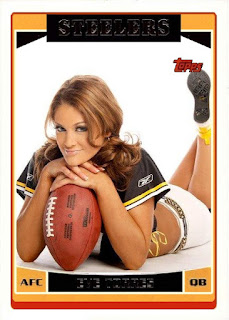