Statues Week concludes with Cards That Never Were, a recurring series in which I create virtual trading cards for people missed in various sets. It's a concept I borrowed from far too many to list, but I appreciate all of their efforts.

Happy Days debuted January 16, 1974 and ran for 11 seasons. Early in the run, Henry Winkler as "The Fonz" became the breakout star and the show's focus shifted more to him.

In 2008, a life-size statue of Fonzie was unveiled in Milwaukee, home to the television series. The Bronze Fonz is located on the Riverwalk in downtown Milwaukee.

In 1976, Topps released a set of Happy Days trading cards featuring all of the characters. I'm stretching my rules a bit, but I thought Winkler and his bronze likeness deserved to be included in that set. 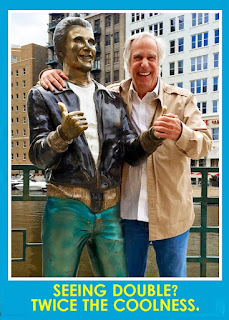