Born in Brooklyn, NY, Mary Tyler Moore rose to fame on The Dick Van Dyke Show and then The Mary Tyler Moore Show, two classic television sitcoms. On the latter, Moore played Mary Richards, a sigle television news-writer living in Minneapolis. The character was beloved. The opening credits featured a memorable song and ended with Moore tossing her hat in the air in downtown Minny.

TV Land commissioned the Mary Tyler Moore statue, near the site of the iconic shot. The bronze statue was unveiled in 2002. Gwen Gillen sculpted the life-size statue.

Is it a statue of Moore or Richards? The debate rages on. I guess it depends on how you look at it. Either way, it is pretty cool. 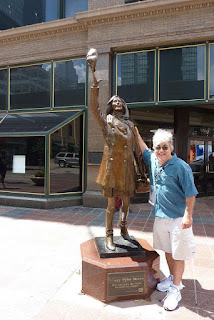 Love the statue of Mary Tyler Moore ... such a classic show!!

And the recently deceased Betty White was the last living full-time cast member.