Celebrity Jersey Cards is a weekly series featuring Celebrities wearing sports jerseys. Today, I continue marching alphabetically through the MLB teams.
Born in Athens, Giannis Antetokounmpo has become a star in the NBA with the Milwaukee Bucks. "The Greek Freak" has won one championship and two MVPs, among other achievements. He earned his Celebrity Jersey Card by throwing out a first pitch for the Brewers. 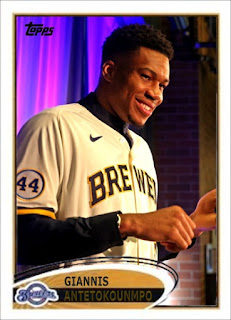 Jerry Kramer was born in Montana, but earned his Football Hall of Fame induction while playing for the Green Bay Packers. The guard played 11 seasons for the Pack, helping them to five NFL championships, including two Super Bowls. Kramer might be most famous for his legendary block against Dallas in the Ice Bowl in 1967. Kramer threw out a first pitch for the Brewers to earn a Celebrity Jersey Card. Ordinarily, I would take off points for tucking in the jersey, but Kramer is old school and well-respected. I'll cut him that break. 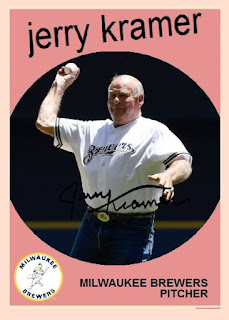