As the title indicated, Absurdities features things I see that are absurd. Today, I feature something beyond absurd. It is morose and in very poor taste.

Homescapes is a game featuring various passageways blocked by pins. The goal is always to remove the pins in such a way to let the contents of the passageways get to the intended goal. I have seen it look like water pipes, gas pipelines and such. I have seen it involve cages or fencing to keep animals away while the main character gets to safety. Then lately, I started seeing today's feature.

An ill woman lies in a hospital bed as a young child (presumably her daughter) looks on scared. The goal is to move the correct pins to allow the medicine to flow, saving the patient.

I'm not overly sensitive, but this strikes me as incredibly macabre and in bad taste. There are plenty of  video games involving soldiers and wars, and those aren't great either, but having a sick woman in a hospital bed depending on you choosing the right pins just seems really crass. Clearly, game creators can come up with better and different scenarios. 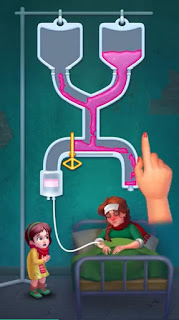 I have to agree with you. That's really uncalled for.

Thanks. It's good to know I wasn't just being too sensitive.

Good to know, it isn't just me.