This is a regular series which attempts to combine my passion for bubblegum cards with my interest in celebrities.  Today I am giving some home town love to my Cubs and White Sox.

Representing the1st place White Sox is Jonathan Toews, star of the Blackhaks, who crosses sports for his Celebrity Jersey Card appearance.  Toews is wearing #19, which is his number with the Hawks.  I had slim hope that it was in honor of Mike Squires, who briefly wore the number for the Sox. 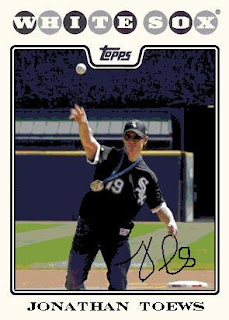 Despite being born in St. Louis (MO), comic actor Kevin Nealon shows no major love for the Cardinals (fortunately).  Actually, the former star of Saturday Night Live makes his first appearance on a Celebrity Jersey Card in a Cubs (they are horrible) jersey.  I do like the out of focus background, reminiscent of the old cards (new cards suck).  Oh well, I guess my attempts to honor 'subliminal man' don't really come across well in type. 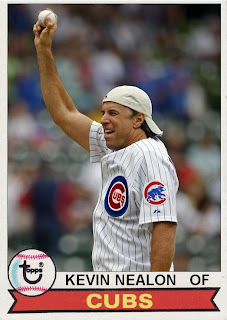