This is a weekly series about friends who have met celebs.

I have known Michele Mupo for several years and have met her a handful of times at conventions.  She is  a singer, songwriter, scriptwriter, talent booker and more.  Michele (of Fuchsia) is the definition of dynamo!
Michele has her hands on everything and seems to be in constant motion.  I also think she meets more celebrities and wrestlers than I do.  Maybe this should be Fuchsia's Beat...but I don't want to give her any more ideas!
Michele and great friend Dawn Marie are the driving force behind WrestlersRescue.org, an organization formed to raise money and awareness for health issues of wrestlers.  They have done great work and Johngy's Beat salutes their efforts!
Michele's big ongoing project is her Keep the Peace video. You can help support the cause and possibly appear in the video by going here.  According to Michele, "the monies generated from the fundraiser, song & video will assist in aiding these brave men & women with job placement, food, grants, home rebuilding/renovation & much, much more."
I have featured Michele with several celebrities in the past.  Today, I am posting a picture of her with actor John-Paul Lavoisier, perhaps best known for his role on tv's One Life to Live.
You can learn more about Michele by going to MUDAMultiMediaEntertainment.com, or Fuchsia's Facebook page or by following Michele on twitter.  Also, check out Michele's YouTube channel for her music and other fun stuff. 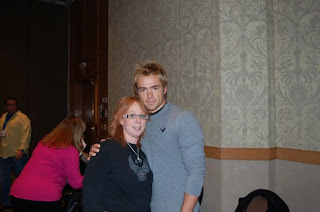