This is a regular feature which tries to combine my passion for trading cards with my interest in celebrities.  Today's post is dedicated to Sky Torvis, a long-time friend and Grateful Dead fan and scholar.

Today is Jerry Garcia's birthday.  He died on August 9.  I learned that the days connecting those significant dates are called "the days between" in honor and reference to the Dead's song.  Unfortunately, I did not find a picture of Garcia in a sports jersey, but thanks to the San Francisco Giants having a "Grateful Dead Night," I was able to get his bandmates on Celebrity Jersey Cards.

Phil Lesh (bass and vocals) was he last member to join the Warlocks, before they became the Grateful Dead.  Lesh is still performing his own music and also tribute music for the Dead.  He was inducted into the Rock and Roll Hall of Fame in 1994 as a member of the Grateful Dead.  Is that Bill Walton lurking in the background?  Keep reading for that answer and more Dead fun. 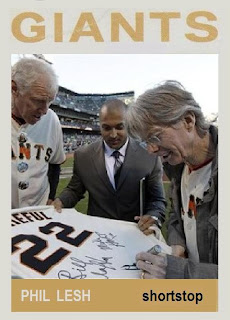 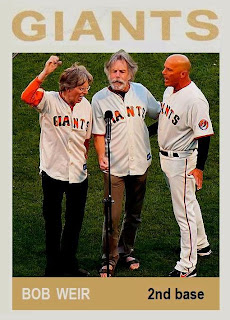 New York native Mickey Hart (drummer) had two stints with the Dead.  (How did a New Yorker get into the Dead?)  Hart and fellow drummer Bill Kreutzmann are nicknamed "the rhythm devils."  Also in the R&R HOF with the Dead, Hart is still performing today.  Hart's card also features Weir and Bill Walton. 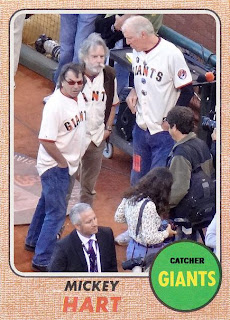 Bill Walton was not an official member of the Dead, nor is he in the R&R HOF.  He was a huge fan though and he is in the Basketball HOF.  I am guessing that Walton's fandom of the Dead started during his collegiate days at UCLA.  Maybe Torvis can provide more info.  Either way, it does seem appropriate that Walton's Grateful Dead Celebrity Jersey Card uses the fantastic 1975 Topps baseball design. 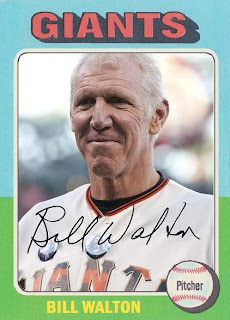