This is a regular series which attempts to combine my passion for trading cards with my interest in celebrities.  Today, I am featuring two entertainment greats.

Frankie Avalon was a teenage idol in the 1950's and he has been performing ever since.  Despite being a native of Philadelphia, Avalon's ties to the Dodgers are well-known.  Tom LaSorda is one of his celebrity friends. Surprisingly, Frankie's jersey is numberless.  I would have bet he would have worn Tommy LaSorda's #2.  He does have one of the most original poses on a Celebrity Jersey Card. 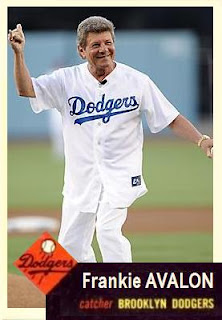 A native of St. Louis, Chuck Berry is a musical icon.  Into his eighties, he is still performing today.  Actually, the St. Louis Cardinals team is only 26 years older than Berry.  I am assuming the picture below is from a couple years ago, when Berry was 84, since that is the number on his jersey.  I have no explanation for the hat, but I am not going to argue with one of the greatest of all time.  I am just proud to put him on a Celebrity Jersey Card. 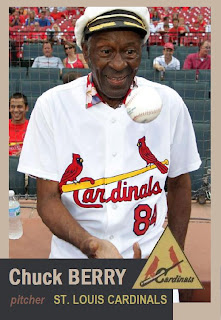 Hi Johngy, Do you actually have cards made?? If you do I have to have one of Chuck Berry!! You did an excellent job it looks great. i will try to send you some pictures when Chuck had a St. Louis Rams jersey on, the Rams honored him for his 80th Birthday at the time...
From a avid Chuck Berry fan,