This is a weekly series featuring friends who have met celebrities.  If you have a celebrity encounter picture you are willing to share, I'd love to run it here in the future.  Just let me know.

I have written many times about Resistance Pro Wrestling.  R Pro is a great organization and it has been so much fun covering their live events and meeting everyone involved with them.  I have had nothing but great experiences with everyone with R Pro.  I like to think I have gained several new friends, along with gaining story subjects!
One of those friends is Sheri Shaw.  I contacted Sheri about a year ago, when I heard she was in charge of music for R Pro.  It took a while to actually connect for an interview, but eventually we got together for one and even got her music partner Brian Judy in for another.
Sheri is a great asset to R Pro.  She is as friendly as she is cool...and her music is great.  Her music sets the stage for the wrestlers and the crowd.  I think Sheri will play an even bigger role as time goes on and R Pro gets bigger.
Resistance Pro's next show is Friday Sept. 14 at Excalibur.  Come on out and see some great wrestling action, accompanied by some great music.  Sheri and R Pro are a winning combination! 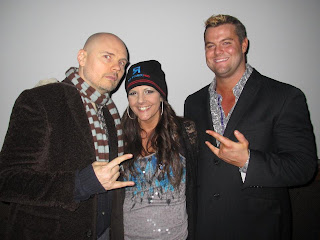 Billy Corgan, Sheri Shaw and Harry Smith in Chicago, IL-Early 2012.
Posted by Johngy at 5:55 AM

Very sweet! Thank you for all your support!
Xo s.