When I was a young Johngy, Ray Rayner was one of my favorite shows.  Among Ray's usual antics was a regular feature involving Chelveston the Duck.  Basically it just amounted to Ray feeding a duck on the set.
Sometimes Chelveston was riled up a bit.  I later found out that his handlers and drivers often irritated him to get a better reaction once on set.  I also heard that Ray's staff would put lettuce in his pant cuffs to entice Chelveston to nip at Ray's legs.
Animal cruelty at its' best in the early 70's.
What does this have to do with the picture below?  Not much really, except for the duck connection.
You'll have to forgive me though.  What can I really say about a human-sixe duck?  I don't even think he was advertising anything.  I think it was just a person roaming around the wharfs of San Francisco dressed as a duck.
Hmm thinking back, I should have investigated this just a bit.  Or maybe it is better that I didn't.
One question does linger (okay, actually several questions linger, but I will ask only one).  Could this have been a descendant of Chelveston? 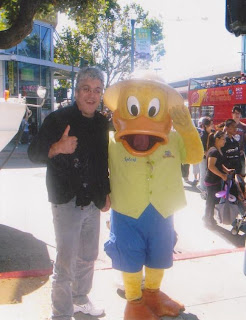 I was a big Ray Rayner fan. I heard Ray hated the duck. Strangely I think the first time I heard John Lennon's "Imagine" was on Ray Rayner. Is that possible?

Anything is possible on the Ray Rayner show. Did you know Ray was part of the real Great Escape?