I have met Greg Valentine several times.  Valentine is generally a pretty quiet, but friendly guy, despite his reputation in the wrestling ring and his nickname of "the Hammer".  I did write "generally".
At the Motor City Comic Con, apparently Valentine had enough of my humor.  I approached his table and the next thing I knew, his big, beefy hands were encircling my neck and squeezing tighter with each passing second.
Once Cuzz was able to talk Valentine into releasing his grip, we had a fun conversation.  He even asked me about looking like Jay Leno (which put him into the Jay Leno Club).
Valentine was inducted into the WWE Hall of Fame in 2004.  It was a fitting honor for a wrestling veteran like the Hammer! 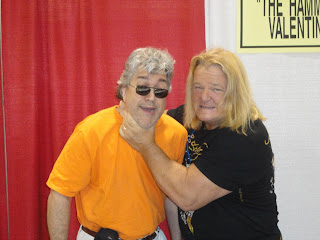