Sure, I have been to Flashback Weekend many times, but I wanted to bring a different perspective, so I sought the help of other attendees.  Enter Michael Rector.
Michael is a veteran of all sorts of these conventions. In fact, we run parallel convention courses...Flashback Weekend, Horror Hound, Days of the Dead and others.
Michael was kind enough to send along a picture of his friend Mike Perry who met Kane Hodder at a previous Flashback Weekend.
Michael also gave me a quick recap of the Kane Hodder experience.
I went with a group of friends and Mike had never been to a convention like this before. When I had seen Kane there, I talked to him briefly and introduced him to Mike and said 'Kane, you got to initiate him like you did me.' So I went to take the photo and like always with new fans, Kane put his hands around Mike's neck as if to choke him and that's when I got the photo. Kane has always been a class act and I enjoy talking to him at any convention I go to that he's a guest at.
So there you have it folks, another ringing endorsement of Kane Hodder. Thank you to Michael (and Mike) for sharing the story and picture.
JohngysBeat.com has hopes of getting a quick interview with Hodder at Flashback Weekend.  Check out FlashbackWeekend.com for more info and schedules for this great event. 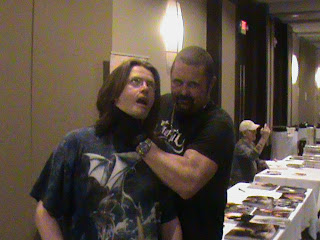 Mike Perry and Kane Hodder at Flashback Weekend in Rosemont, IL-August 2011.
Posted by Johngy at 5:55 AM