Oh just admit it...we all watched Beverly Hill 90210 at some point.  Kelly versus Brenda was the 90's version of Ginger versus Mary Ann.  Lucky Luke Perry!  He had love scenes with both.
Perry was pretty hot back in the hey day of 90210.  He did a few feature films and some episodic tv after 90210, but nothing approached his success on that show.  Still, none of this seems to bother Perry.
When I talked to him at Wizard World, he stated that he worked a bit, but liked just relaxing and enjoying his life.  It is very hard to argue with that logic.  He also said he likes doing these conventions.  He meets old fans, relieves great memories and makes a few extra bucks.
I like Perry.  He seemed like a genuinely nice guy.  He was very approachable and pleasant.  He also made sure that everyone was happy with the pictures they took with him. 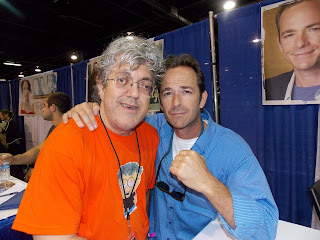 Luke Perry and me at Wizard World in Rosemont, IL-August 2012.
Posted by Johngy at 5:55 AM