On the Beat with Aquaman at Wizard World 2011

I have met Aquaman many times over the years at various conventions.  My most frequent meeting is at Motor City Comic Con where I usually meet the same Aquaman.

This is kind of a rarity, though.  Aquaman is not one of the popular "costumes" at these events.  You will always see classical characters like Batman and Wonder Woman.  You will also see plenty of currently popular characters like The Joker.  Aquaman tends to fall through the cracks.
At last year's Wizard World in Chicago, we were wrapping up one of the days when we ran into Aquaman near the exit...and it was old school Aquaman, too!  Of course, I snagged a picture with him.
I applaud his Aquaman tribute.  We didn't have time to really talk to him, but I wonder if he does it as a big fan or more to be different.  Either way is fine with me.  Anything to put Aquaman at the forefront is great!
I am happy to see at least one person buck the norm and go with something different.  Even better, he did not go over the top.  He just went simple and effective.
This year, I Talked to Aquaman and you will see that interview here very soon. 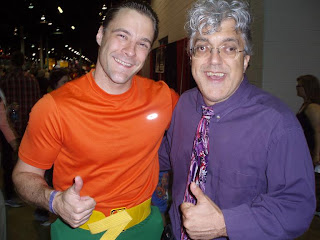 Glad you were able to meet one of your favorite characters!