The Jay Leno Club has expanded, thanks to the Bella Twins at Wizard World.  The Jay Leno Club is comprised of celebrities who have mentioned a Johngy-Jay Leno resemblance.  Now, Nicole and Brianna Bella (aka the Bella Twins) have joined this prestigious group.
The Bella Twins are former WWE divas.  Each Bella held the WWE Divas championship once during their stay in the WWE.  The Bella Twins are also known as Brianna Monique Garcia-Colace and Stephanie Nicole Garcia-Colace.
If their names confuse you, their beauty will amaze you.  I am also happy to report that they were both as sweet and pleasant as could be.  Matt and I had a fun exchange with them at their both and I saw plenty of other fans walk away happy and impressed after meeting them.
Lots of talented people pass through the WWE and then disappear.  I believe the Bella Twins will go on to bigger and better things.  I hope so, because they seem like very genuinely nice women.
I hope to see them again at a future convention.  No matter what though, they will always be special to me and the Jay Leno Club.
My only real problem though is how to count them.  Are they the fourteenth member or the fourteenth and fifteenth members of the Jay Leno Club? 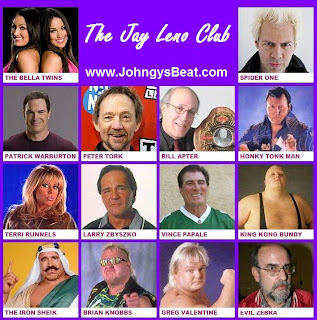 I say the Bella "Twins" are the 14th member of the Jay Leno Club...

CAUSE is you make them the 14th AND 15th member, then I demand that you make King Kong Bundy the 6th, 7th 8th AND 9th member!!!

EZ-Well, I can't argue against that logic.