Ohhhh baby...it's football season again!  I love football season.  I am looking forward to the Bears having a successful season.
The Bears start their season with the Indianapolis Colts.  In previous seasons, that would have spelled doom, since the Colts were lead by Peyton Manning, one of the greatest ever and clearly one of my favorites.
This year, Peyton will be trying to recapture his magic in Denver and the Colts will need more luck than Andrew can provide.  I like Luck (and I liked his father, too), but he is in store for a long afternoon, if the Bears defense is on their game.
A few years back, Matt, Scott and I ventured out to Indianapolis to see the Houston Texans play the Colts.  I was a bit torn, as I liked both teams.  Ultimately, I went with the home team and my man Peyton.
Matt was on the hunt for a "Friendly Encounter" opportunity.  He ran into a "Colt" in the concourse of the stadium.  This was one of the very first pictures specifically taken as a "Friendly Encounter."  Ultimately though, I chose to use it for Bear Down Sunday #1.
If the "Colt" looks a bit lifeless, let's just hope that the Colts look equally as lifeless today. 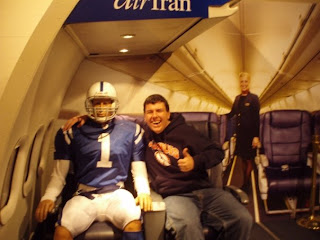