This is a weekly series about friends who have met celebs.

Today is a very special Friendly Encounters, because both men are celebrities.  More important, both men are great guys and I am very proud to call them friends of mine.
A couple days ago, I featured Johngy's Beat Special reporter Tommy else interviewing Professor Kliq.  They were outside of the Elbo Room in Chicago (IL) and also notable was that Tommy was sporting his new Johngy's Beat tshirt.  This type of humor and loyalty is priceless!
I met Tommy last December when I contacted him about his tryout for Resistance Pro Wrestling.  Since then, I have seen Tommy many times, including once with my nephew on his T3 Universe show.  Matt and I also attended one of his T3 Fitness classes.  If I lived closer, I swear I would go every weekend.  Tommy is just a genuine, funny, positive guy, who I feel is becoming a closer friend each time I see him.
I met Professor Kliq through Tommy.  Professor Kliq makes awesome music on his computer (some of which we have used on our interviews).  He is also a DJ and a self-described "crappy keyboard player".  I have heard his music and he is anything but "crappy".  He is innovative, interesting and cool.
I interviewed the Professor at the last Resistance Pro event after meeting him for the first time.  Like Tommy, Prof Kliq is a great guy and I hope to get to know him more as time goes on.
For more info on Tommy and T3 Fitness, check out the T3 Fitness Facebook page.  He updates it often with fitness news, interesting info and even some Eric St. Vaughn updates.
For more info on Professor Kliq, head over to ProfessorKliq.com.   You should also head over to see Professor Kliq live at the Elbow Room on September 15 at midnight.  Professor Kliq live at the Elbo Room is guaranteed to be a fantastic night of music!
Tommy Else and Professor Kliq...two great guys...two great friends...one awesome Friendly Encounter! 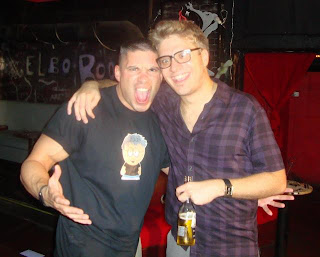 Tommy Else and Professor Kliq in Chicago, IL-August 2012.
Posted by Johngy at 5:55 AM