Hardcore Pawn with Seth and Ashley (and Johngy)

Hardcore Pawn.  Those two words describe their show precisely, but also lead the mind into other directions.  I will try to avoid the cheap and easy joke (for once).  Instead, I will focus on siblings Seth Gold and Ashley (Gold) Broad, children of patriarch Les, owner of American Jewelry and Loan.
They were an unexpected late addition to the Motor City Comic Con.  Actually, since their business is located in Detroit, it is a natural fit (I am betting it was Ashley's idea).
I was excited about meeting them, but also curious as to how they would be.  If you have seen their show, you see them at their best and at their worst.  Reality shows often portray their stars in certain ways for the betterment of ratings at the expense of the total truth.
Granted I only spent a few minutes on two days with Ashley Broad, but she was as sweet as can be.  We talked about the show, the convention and even a bit about this site.
In the picture we took, Ashley jokingly raised her fist to Seth, who did not look too amused.  Then she suggested they both raise their fists to me.  Ashley was totally cool.
By omission, I am not trying to rip Seth.  He was polite, but a bit aloof or maybe preoccupied with others.
This all leads me back to my conclusion that it was Ashley's idea.  Ashley would see it as a marketing idea, while Seth would suggest they are losing money by not being at the store and their participation at MCCC would not lead to future business.
Of course, I could be wrong.  I invite either Seth or Ashley to comment on this and set the record straight.  I also thank both, especially Ashley, for being very nice. 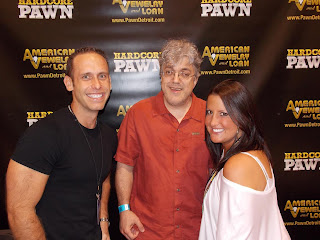 Is this Seth arm????? Or is photoshopped?

No Photoshop[ or trickery. Seth was pretty buff at the time of this photo.