This is a regular series which attempts to combine my lifelong passion for trading cards with my interest in celebrities.  Today I am featuring opposite ends.  I believe these would represent the shortest and tallest figures ever on Celebrity Jersey Cards.

It would be interesting to see LeBron James in the Cleveland Browns backfield.  Cleveland fans think it would be interesting to see James in the Cavaliers frontcourt.  Unfortunately, James followed the green, joined his All-Star friends in Miami and won a title (most unfortunate).  I cannot deny his talent, but I don't have to cheer for him.  I do like the look of his Celebrity Jersey Card, although I think the pose would look better on a 1973 Topps card. 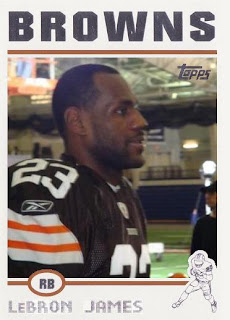 On the other end of the spectrum (or tape measure) is Verne Troyer.  The native of Michigan sports a Steelers jersey for his Celebrity Jersey Card.  I listed him as a tight end, because it fits the number.  Also, by process of elimination, tight end would be the only possible spot for him, assuming he could catch a pass.  Imagine trying to defend a pass to him. 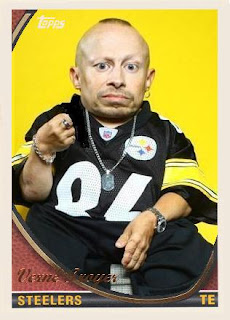