(Almost Not) on the Beat with the Chicago Rush

My association with the Chicago Rush almost ended before it even officially started.  My mistake due to haste (as opposed to ignorance) almost cost me.
I contacted Ryan Young (former Director of Media Relations) last season about doing some coverage for the team.  He responded back with some questions about my credentials and intent.  Because I was very excited about the possibility of being involved with the Rush, I quickly emailed a bunch of links of my writing and interviews and I listed Coach Bob McMillen as one of the main people I wanted to interview.
I misspelled Coach McMillen's name and Young called me on it, citing the rush's need to have serious committed, knowledgeable coverage.  It was a stupid mistake on my part and one that almost cost me big time.
I responded quickly, that the misspelling was just bad typing and that I was a big fan of Coach McMillen's.  I then went into some McMillen trivia which I knew.
McMillen is an AFL legend and I was a long-time fan.  He started his AFL career with the Arizona Rattlers.  He played six seasons there, followed by two with the San Jose SabreCats.  In 2003, he joined his hometown Rush.  He retired as the AFL's second all-time leading rusher.  He is one of only two players who played in the ArenaBowl with three different teams.  In 2011, the Rush retired his #11.
Fortunately, Young accepted my explanation and I started covering the Rush late last season, with hopes of covering more in 2013.  I was really excited.
The Rush underwent a lot of changes since last season, one of which was the appointment of Mike McLaughlin as Director of Marketing & Public Relations.  McLaughlin and I discussed my intentions and I am back on the beat for the Chicago Rush and more excited than ever.
I applaud Young for challenging me and also for his willingness to understand that it was a simple mistake and not my lack of knowledge of the team.  He handled it all very professionally.
Now, McLaughlin is handling the media and he has been extremely helpful and patient with me.  We have discussed some stories and angles for me to cover.  He has offered his assistance when possible.  In short, he has made this a very pleasant and fun situation.
This whole thing has already been a learning experience.  I need to remember to slow down my excitement and concentrate on typing accuracy.  I want to thank Young, McLaughlin and the Rush organization for being professional and caring enough to make certain that their coverage is done professionally.
The best part of the story is that on Media Day, I finally got to meet and interview McMillen.  That was a real thrill.  You can see that interview at On the Beat with Coach Bob McMillen.
Please check out ArenaRush.com for more info on the Chicago Rush.  The next game for the Rush is this Sunday against the Pittsburgh Power at 3 p.m. at the Allstate Arena.  I will be there, right in the press area. 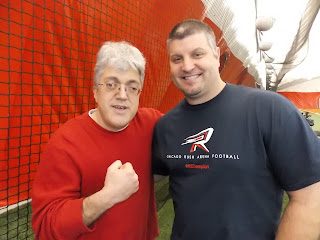