I first met the wrestler known as Grin about a year ago.  On the surface, he has a Joker-esque gimmick, but I think it is deeper and more developed and complex than a mere copy.  Everything from his mannerisms to his speech to his entrance music really fits the character and creates the mood.  This is definitely one of my all-time favorite wrestling gimmicks on the independent scene.
I have interviewed and talked to Grin several times.  He is very outgoing and interesting.  I always am intrigued to watch wrestling villains interact with fans after the matches.  How does a heel stay a heel and still be friendly with fans?  Grin knows how and does it well.
Maybe it works as part of his "twisted" personality.  Maybe it works because he just has fun.  I can't quite figure it, but it works.  Maybe next time, I will ask him.
Grin (and the Ring Master) met wrestling legend Paul Bearer (William Moody) at the February Pro Wrestling Blitz show.  Sadly, this would be Moody's last event, because he passed away a couple weeks later.
I love the picture, because it is a unique juxtaposition of great characters.  As Paul Bearer, Moody was often partnered with the Undertaker, perhaps the most successful and best wrestling gimmick ever.  Moody's Bearer was a vital part of the Undertaker's legacy throughout his career, although that was not the extent of Moody's wrestling career.  For more info on Moody (Paul Bearer), check out his obit on Legacy.com.
I happened to be at that Blitz show.  I was very near these men when the picture was taken.  I commented to my friend that I thought Moody looked very exhausted and sick.  I did not even want to trouble him to take a picture with me.  While I am happy I did not pester him, I am sad that I won't have that opportunity again (although Moody and I had a brief conversation...more on that in a future post).
Anyway, getting back to the main point, Grin is developing a fantastic character.  I am glad he got to meet one of the all-time great characters (and men) in wrestling.  Rest in peace, William Moody.
Check out Grin's Facebook page to learn more about this character and to get updates on where he will be next. 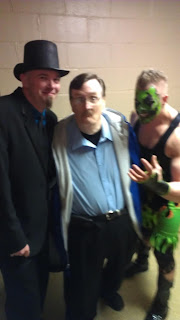 The Ring Master, Paul Bearer and Grin in Joliet, IL-February 2013.