Today is a very special day (or at least half-special).  It is the half-birthday of the legendary Evil Zebra.  You might ask why I am dedicating a day to celebrate EZ's half-birthday, instead of waiting for his real birthday.  The fact is I did not want to wait that long and be lumped in with all of the other well-wishers.
I have known the Evil Zebra for a few years, although I have never met him.  He claims to be evil, but I have yet to see that side of him.  I am not saying he isn't evil though (hedging my bet, just in case he is...I don't want to get on his bad side).
I know he is based on the east coast.  I know he has met a ton of interesting celebrities (or some celebrities have met him).  He has even shared some of those pictures and stories on JohngysBeat.com.  I still say he needs to write a book.  I know he runs a fun Evil Zebra Yahoo group.  He is also very patient with me whenever I have problems logging onto the group.  (See, another non-evil example.)
Aside from his many accomplishments and awards he has attained in his life, he has achieved two milestones on JohngysBeat.com.  He is the first (and thus far only) member of the JohngysBeat.com Jay Leno Club to wear a Johngy's Beat shirt.  He was also the first member of the wrestling community to don the Johngy shirt.  Those two facts alone make him legendary.
I want to take this time to publicly thank EZ for all of his support over the years.  The Evil Zebra is truly one of a kind.
So thanks EZ...oh and enjoy your half-birthday!
...and somebody please, get the man some cake!!!! 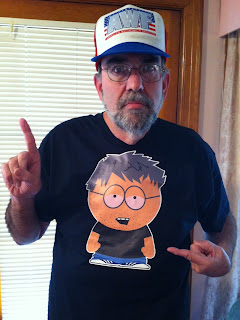 The stylish Evil Zebra somewhere on the east coast-Fall 2012.
Posted by Johngy at 6:00 AM

Where the hell did you find that picture.... it's gotta be photo shopped or something..... first off, you would NEVER catch me wearing an UGLY shirt like that... EZ has alot more class than that.... second, if in fact I did get forced into wearing something that UGLY, you would sure as hell be seeing a diff'rent finger sticking up!!!

For more on this story:
http://sports.groups.yahoo.com/group/EvilZebra/


Sent on the Evil ® Network from my ZebraBerry ®

Where's the love from the millions and millions of fans who read Johngy's Beat..... you would think at least 1 of them would have dropped by to wish me Happy Half Birthday!!!!

P.S. Hey Johngy thanks again for the $50.00 bill that you stuck in the envelope with the shirt.... and yes, anytime you want me to wear an ugly shirt for you, just do the same thing!