This is a regular series which attempts to combine my lifelong passion for trading cards with my semi-professional interest in celebrities.  Since the baseball season is not going well for the Chicago Cubs, I thought a little sibling love and unity might send good vibes their way.

Virginia Madsen is a talented actress and a Chicago native.  She has worked steadily since debuting in Class.  She also starred in Sideways, for which she won several awards.  While I could not find a number on her jersey (who wouldn't want her number?), I do really love the look of her Celebrity Jersey Card. 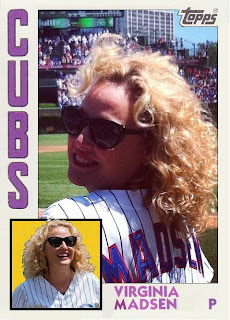 Virginia's older brother Michael Madsen is also a native Chicagoan.  Like Virginia, he has worked steadily since the early 80's.  His numerous movies include Reservoir Dogs and Kill Bill.  Also like his sister, I cannot see a number on his Celebrity Jersey Card, but shots including the ivy at Wrigley are always cool. 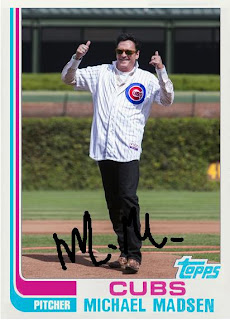