Jacklyn Zeman started out in 1976 as Bobbi on tv's The Edge of Night.  Currently she plays Sofia on tv's The Bay.  In between, she has done a few other roles, but not many.  That is mainly because she had been on tv's General Hospital for a whopping 33 years!
I always wonder about actresses who spend such a long time on a daytime drama.  Clearly Zeman has the acting chops to do other things.  In her lengthy run on GH, her character ran the gamut from bubbly to serious to comedic to sexy and more.  I just would like to know why she stayed so long or limited herself mainly to one show.
Maybe she loved it there and made a good income.  Maybe her role took up too much of her time for her to do other projects.  Maybe she liked doing nothing in hjer off time.
I can't argue against any of those reasons.  I just am curious.
In any case, I have enjoyed watching Zeman over the years.  I enjoyed meeting her even more at the Hollywood Celebrities Show.  Zeman seemed excited to be there.  She was so nice.  She was everything you would want in a celebrity guest.
She greeted every fan as they approached.  She engaged everyone in conversation.  She gladly posed for pictures and even came around the table to make sure the picture was good.  She made it a good time for everyone and she seemed to be having a good time herself.
Thank you Jackie for a great encounter and even more so for so many years of entertainment! 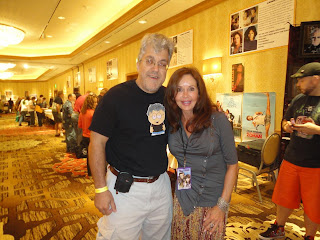 Jacklyn Zeman and me in Rosemont, IL-September 2012.
Posted by Johngy at 6:00 AM