I have known Jason Fleigel for about 18 years.  This Saturday, I will see Jason in a completely new light.  This Saturday, Jason will become a husband and I will be there to share in his happiness.
Jason and I worked together for years and a strong friendship was formed during those years.  It has been over a decade since he departed Lerner Newspapers for a brighter future, but our friendship remains.
A while back, Jason and Heather became a couple.  I truly have never seen him this happy.  I could not be happier for Jason (although it is almost unnerving).  He deserves every bit of happiness that comes to him.
On the subject of Jason's happiness, few things make him happier than Star Wars.  Last year, he went to a Star Wars convention and met Sam Witwer.  In Jason's own words:

Meeting Sam Witwer at the Clone Wars panel, a rather cool guy taking the time to talk to fans. He is the voice of Darth Maul (Clone Wars) and Starkiller (Force Unleashed) and plays Aidan on the SyFy show Being Human. And despite what Ashley Prester & Heather M Knecht say, I BLINKED when Ash took the pic!

I can imagine how happy Jason was at the convention.  Star Wars is not my thing, but I have been at similar conventions featuring my favorites.  Even so, I think Jason will be even happier this Saturday as he marries Heather.
I wish Jason and Heather a lifetime of happiness.  I thank them for letting me share their day with them.  I will proudly be standing up for Jason as one of his groomsmen.  It will indeed be a day of great joy.  Good luck and best wishes always, Heather and Jason! 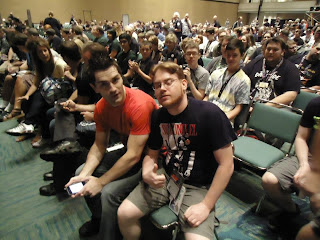