In Paper Lion, George Plimpton, a talented writer, told of his experience as a pseudo-quarterback for the Detroit Lions.  Last Monday evening, I took the first steps in my journey as a Paper Marlin.
The Lincolnwood Marlins are a team of roughly 12 year olds playing in the Majors Division of the Little League.  Thanks to the hospitality (and patience and humor) of coach Louie Atsaves and the welcoming nature of the team itself, I will be one of the members (albeit it the biggest member) of the Marlins.  This really does make me a big fish in a small pond.
When it comes to actual competitive league baseball, I admit I am a bit of a novice.  I have not played any type of organized league baseball since… well never really.  I have played some league ball in pickup games on occasion and I have played all forms of softball for most of my adult life.
So what is a 48 year old wannabe writer doing as a wannabe little leaguer?  I am reminded of Cosmo Kramer’s line, “We’re all on the same skill level.”  Actually, that is a bit of a stretch.  Judging by some of the action I witnessed Monday, some of these kids have already passed my skill level, but I digress.
Due to a variety of health reasons, I could not compete in sports as a child.  Needless to say, my athletic skills were not honed until I started playing rec league sports in high school and by then, I was woefully behind the pack.  Still, I was gritty and I always brought something (usually humor) to the team.
Last fall, I attended some of the Lincolnwood team’s games and even helped out with fielding drills.  That gave me the itch to play, to fulfill my dream of playing little league baseball.  The question was how to pull it off without looking like a complete buffoon.
Then it hit me.  Paper Lion.  Plimpton was a genius.  How else could a middle aged writer join a real NFL team and take some snaps in an exhibition game?  But Plimpton did not stop there.  He suited up for the Boston Bruins in Empty Net.  He attempted to join the PGA Tour in Bogey Man.  Next to press credentials I occasionally get for JohngysBeat.com, this is the best scam ever.
I admit, I am no George Plimpton.  In all fairness though, the Marlins are no Detroit Lions either (with no disrespect to my new teammates).  If Plimpton could be a Lion, Johngy can be a Marlin.
I am not asking for any breaks from Coach Lou either, despite our 25 year friendship.  I admit he and Coach Harry Konstantopoulos took it easy on me in my first team practice, but as excellent coaches, they realized I was a bit rusty and would need to be indoctrinated a bit slower than the rest.  (A good coach knows his players).
Don’t get me wrong though, I accounted fairly well for myself on Monday.  I caught or blocked most of the throws I got at catcher.  My throws were fairly accurate and reached each base on the fly.  I also made solid contact on most pitches Louie threw to me (although I have a feeling he might have grooved a few for me).
My shins are bruised, but I am wearing them as badges of honor.  I have some aches from muscles I am not used to using in that way, but the soreness pales in comparison to the thrill of the experience.
During the course of the season, I will be updating my progress, as well as bringing you an insider’s look at the ups and downs of these little leaguers.  I hope you enjoy the ride as much as I will. 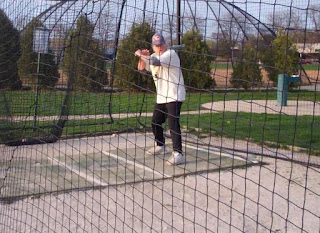 Keep up the good work! You will get rewarded so many times over by just watching how well the team gets better! Have fun!

Great blog entry! Keep us posted during the season.