This is a regular series in which I try to combine my lifelong passion for bubblegum cards with my semi-professional interest in celebrities.  The Chicago Blackhawks face the Boston Bruins in the Stanley Cup Finals.  It doesn't get better than two Original 6 teams battling for Lord Stanley's Cup!

I am a big fan of Michael J. Fox.  I am also envious of him.  He has acted with Justine Bateman and Julie Warner, he dated Nancy McKeon and he married Tracy Pollan.  That is quite a collection fo some of my favorite women.  Oh wait, this is supposed to be about Fox.  He is a big hockey fan and often laces up the skates for charity events or just fun.  I am not sure why he wore the Boston Bruins sweater, nor do I know the reason for his #88, but I like the look of his Celebrity Jersey Card.  It has the feel of the real 1973-74 set.  I like Fox a lot, but I cannot cheer for the Bruins. 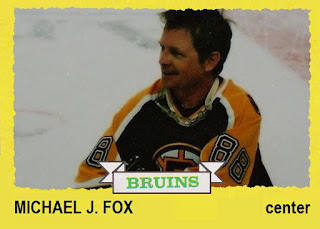 The late Ron Santo was finally elected to baseball's Hall of Fame.  It was long overdue for the best 3rd baseman in the National League for the 1960's.  Santo donned the Indian sweater, complete with his #10 (although maybe he was also paying tribute to Dennis Hull) for an appearance at a Blackhawks' game.  Santo never won a championship, but the Hawks will! 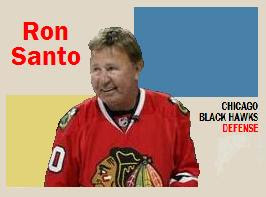 Go Hawks! It doesn't look like it will be an easy road to the Cup!