This is a regular series which attempts to combine my lifelong passion with sports trading cards and my semi-professional interest in celebrities.  The Blackhawks and Bruins are having an awesome series and this edition celebrates their toughness.

Boston is known for its' toughness and few exemplify it better than retired MMA star Kenny Florian.  The Massachusetts native attended Boston College and went on to have an excellent career in MMA.  In fact, Florian is considered to be the best UFC fighter never to win the title.  I hope there is some symmetry regarding the Bruins chasing the title this season.  On his Celebrity Jersey Card, Florian is wearing the #22 of Hall of Famer Brad Park. 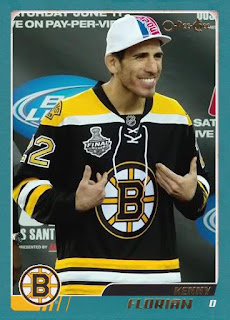 Football and hockey often battle for Chicago's toughness crown.  Northwestern coach Pat Fitzgerald found a way to have a compromise when he donned the Hawks sweater for his Celebrity Jersey Card.  A former standout with the Wildcats, Fitzgerald played for the Dallas Cowboys, before eventually becoming the youngest coach in the Big 10.  He may not be an MMA fighter, but nobody questions Fitzgerald's toughness. 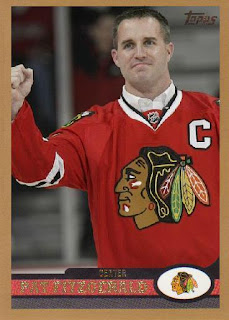