JohngysBeat.com has previously teamed several times with Eric St. Vaughn of Resistance Pro Wrestling.  In fact, JohngysBeat.com is a proud sponsor of the talented, rising star.  This Saturday, ESV and JohngysBeat will once again team, as they provide coverage of Kicks For a Cure, the world's largest kickball tournament.
The ESV-Johngy pairing has the possibility of becoming one of the all-time great media duos, like Siskel and Ebert, Regis and Kelly or Statler and Waldorf.  Each brings a tremendous fan following.  Chants of ESV" echo throughout every place St. Vaughn wrestles, while JohngysBeat.com shirts are seemingly everywhere.
More important that the actual ESV-Johngy combo is what they are covering.  Kicks for a Cure raises money to help fight cancer and support Receptions for Research, the Foundation started by former Chicago Bears and current Carolina Panthers tight end Greg Olsen.  Olsen's mother survived her battle with cancer.
The work that is done by all involved is incredible.  I have been part of smaller similar events and I can vouch for the effort required.  Sure, on Saturday, thousands of spectators and teams of kickballers will have a great time and rightly so, but none of that is possible without the tireless efforts of all involved.
ESV and Johngy intend to bring many and varied stories, including inspiration, humor and everything in between.  We will have videos and pictures.  When you get a power team of ESV and Johngy, you get much more than a skimming of the highlights.  As Rob Van Dam (one of ESV's wrestling idols) says, you get "the whole show."
I encourage everyone to come out and enjoy a day in Grant Park.  What else is better than a huge kickball tournament to help cancer with random appearances by ESV and Johngy?
For more info on this great event, check out KicksForaCure.mytmc.com, ReceptionsforResearch.org and the Kicks For A Cure Facebook page. 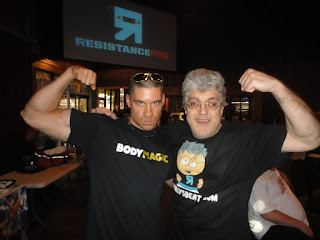