Scott Beatty owns and operates AU Sports Memorabilia, the best sports card store ever.  I have also called upon Scott to handle a few interviews for JohngysBeat.com.
At C2E2, Scott and I got some great interviews, but we also met some interesting people, too.  For instance, Scott met Daenerys Targaryen (The Mother of Dragons) from Game of Thrones.
I admit that I have no idea who that is.  I was so clueless that when I snapped the photo, I cut off her all important basket.  Apparently that basket is crucial to the character.  How could I have not known and how could I have made such a blunder.
Believe me, I was told of my flub.  Fortunately, we ran into her again and we were able to redo the picture and therefore erase my grave error.
While I certainly can respect the significance of Daenerys Targaryen, I am much more excited about the next celebrity Scott will meet.
This Saturday, June 8, Scott is bringing in Bobby Douglass, former quarterback for the Chicago Bears.  Now that is a celebrity!  Douglass was a quarterback who was ahead of his time and stuck with a bad team. In the current era or with better talent, Douglass could have done some interesting things.  He had size and running ability like no other.  Even back then, with little talent around him, he was one of the few bright spots on some dismal teams.
I will be on hand at AU for the Douglass appearance.  It will be good to talk football with him and the fans, (especially during this mediocre baseball season).  I won't have to worry about a darn basket either. 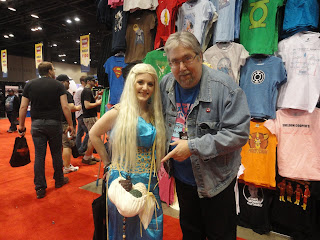 Daenerys Targaryen and Scott Beatty in Chicago, IL-March 2013.
Posted by Johngy at 6:00 AM