Barry Ryte Kicks for a Cure

When I met Barry Ryte about a year ago, I was very happy to score the On the Beat with Barry Ryte interview with him.  Ryte had wrestled a bit in the WWE as Dan Barone.  More importantly, Ryte was back in the ring after battling cancer.  This Saturday, I will once again see Ryte and he will once again be battling cancer, but in a very different way.
On Saturday, June 29, Ryte will be part of a team taking part in the Kicks for a Cure event in Grant Park in downtown Chicago.  The teams will participate in a kickball tournament to help raise money to help fight cancer and support Receptions for Research - the Greg Olsen Foundation.
Kicks for a Cure is the world's largest charity kickball tournament.  There are a few organizations behind Kicks for a Cure, including Receptions for Research - The Greg Olsen Foundation, TMC and C.H. Robinson, but there will also be over 1,200 participants, fans, volunteers and me.
Currently with the Carolina Panthers, Greg Olsen founded Receptions for Research in 2009 to honor his mother, who is a cancer survivor.  The stated goal is "to provide hospitals, doctors and scholars the resources necessary to enhance the lives of those affected by various forms of cancer and cardiovascular diseases or disorders."
While the former Bear Olsen honors his mother, Ryte has similar selfless motives.  Ryte told me, "Being once sick with cancer I realized how much more people are affected by certain illness and disease. This past night I ran a mile for the cure and now I am happy to be a part of Kicks for a Cure.  I was chosen to help represent Resistance Pro Wrestling on that day."
A better choice could not have been made.
I will be at Kick for a Cure to get pictures, interviews, stories and coverage.  I will also be there to cheer on Ryte and all others who are helping to make a difference with Kicks for a Cure!  I hope you join me in attendance.
For more info on this great event, check out KicksForaCure.mytmc.com, ReceptionsforResearch.org and the Kicks For A Cure Facebook page. 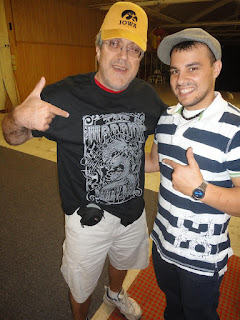