This is a regular feature which attempts to combine my lifelong passion for bubblegum cards with my semi-professional interest in celebrities.  It has been a while since the last Celebrity Jersey Cards, which highlighted Chicago baseball and featured Kelsey Grammer and Nick Jonas.  Maybe now, you see why it has been a while.  Today, I am cleansing the palate though, while still highlighting Chicago baseball.

Actress Kathleen Robertson actually has a connection to the aforementioned Grammer.  They both were on tv's Boss, a fictional series focusing on Grammer as the Mayor of Chicago.  Robertson might be best known for her role on Beverly Hills, 90210, but she has also done plenty of other television and feature films.  Robertson must have been promoting Boss when she threw out the first pitch at US Cellular.  She was very excited, as you can see in this video of her pitching and doing a little jump.  Of course, I would have liked it jump or no jump.  I don't know Robertson's connection to #12, but at the time of this pitch, it belonged to A.J. Pierzynski.  Robertson, as an excited, attractive woman pitcher, makes this one of my favorite Celebrity Jersey Cards. 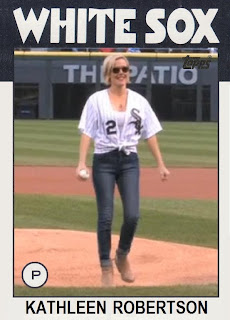 Jason Alexander also appeared with Kelsey Grammer in the 2004 musical adaptation of Charles Dickens' A Christmas Carol, but he is obviously most known for his role as George on Seinfeld.  While Alexander isn't nearly as cute as Robertson, I do like his Celebrity Jersey Card.  He gets points for wearing a Cubs hat and I also like the tarp.  My only complaint might be the shirt under the jersey, but it appears to be casual enough to be okay.  Besides, it is better than when he wore the Lou Gehrig jersey. 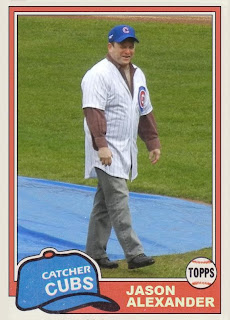 Wait, Tim Blackwell was on Seinfeld? I'm confused. Oops!
" Babe Ruth was nothing more than a fat old man, with little-girl legs."

Okay Hack, you got me on this one. I swear, I read your comment and could not figure out the connection. Talk about sleepwalking. Ding ding ding. I finally got it. Nice catch.