Mike Vail had an excellent start with the New York Mets.  He hit .302 in 171 plate appearances for the 1975 Mets.  His future looked bright and the Mets had hopes for more success.
His production dropped in 1976 and  rebounded a bit in '77, but he was still waived and picked up by the Cleveland Indians.  He was traded later to the Cubs for Tarzan Joe Wallis.
He spent about 2 1/2 seasons in Chicago, hitting above .300.  It seemed like he was here longer (in a good way).  He had limited power and no speed, but he was a solid outfielder, especially during those lean years for the Cubs.
He was traded to Cincinnati for Hector Cruz (of the Cruz brothers).  After stops in San Francisco, Montreal and Los Angeles, Vail retired after the 1984 season with 447 hits and a .279 career average.
Vail fondly remembered his time in Chicago.  He stated it was his favorite time playing.  He did play here the longest and had the most success here.  He recalled some teammates, such as Larry Biittner and Dave Kingman.  He even teared up talking about the late Steve Macko.
As I wrote earlier, speed wasn't in his arsenal.  In 20 stolen base attempts during his career, Vail was successful three times.  That's not so good.  In fact, he is tied with Chris Cannizzaro for most times caught with only 20 attempts.
One fan brought a huge Wrigley Field poster which featured many Cubs autographs, some accompanied by specific stats or notations (like Bruce Sutter's 1979 ROY).  Vail joked that he didn't really have any significant numbers to add to his name other than his uniform number.  That got a laugh from the crowd.
It was great to see an ex-Chicago player happily recall his time here.  Vail seemed to be in solid shape.  He still looks like he could line one for a single.
He probably hasn't lost much speed either! 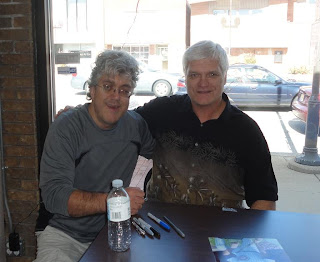