The Chicago Bears are 7-6 and tied for first in the NFC North.  The Cleveland Browns are 4-9 and in last place in the AFC North.  This should be a win for the Bears, especially considering how great they played last Monday.
Even with their recent winning ways, the Bears could still use help on defense.  How about Brian Brikowski?  Brian is a free agent defensive end, who played for the Chicago Rush last season.
The connection is that Brickowski also played for the Cleveland Gladiators in 2012 and 2013.  ESPN praised him for making a huge impact for Cleveland.
Additionally, Brikowski has long-snapped.  Patrick Mannelly has been injured a bit last season and this one, too.  Having a quality backup snapper would be a good thing.
I know it is a long shot, but I just really like the players from the Rush.  These guys were such class acts in the face of such chaos with the Rush.  I would love to see the players, like Brickowski, get a shot at the NFL.  If you would like to see where he might play next season, you can follow Brikowski on twitter! 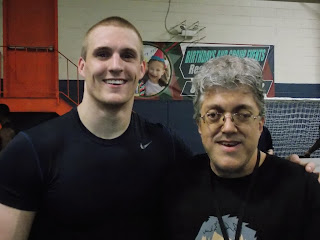 Brian Brickowski and me in Palatine, IL-August 2013.
Posted by Johngy at 6:03 PM