This is a recurring series which attempts to combine my lifelong passion for trading cards with my semi-professional interest in celebrities.  Today, I am saluting the best and worst teams in the NBA.

Singer Clay Aiken represents the 19-3 Indiana Pacers.  Aiken has no connection to Indy or the Pacers.  He is just one of those entertainers who wear the jersey of the city where they are performing.  At least he chose Hall of Famer Reggie Miller for his Celebrity Jersey Card appearance. 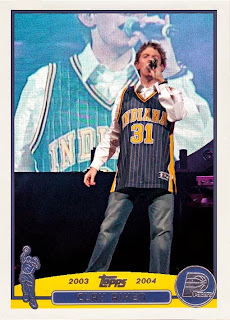 Damon Wayans became a member of the Utah Jazz for his role in Celtic Pride.  He is joined on his Celebrity Jersey Card by Vladimir Cuk.  Wayans is repping the #2, which doesn't have a lot of stars associated with it for the Jazz.  I will go with Derek Fisher, depite him only playing one season for Utah.  Actually, Kuc's #71 has a better story.  It represents his height of 7'1". 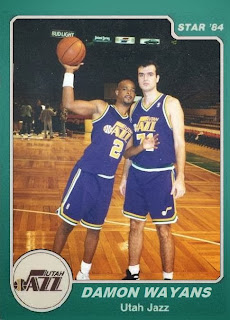